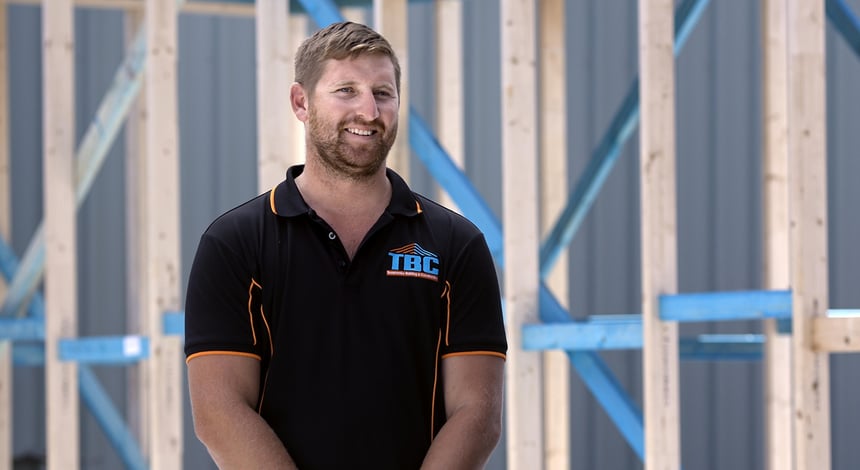 The new Hebel PowerPanel50  is receiving a warm welcome from the building industry.

Developed by CSR, the Hebel PowerPanel50  sets new standards in construction efficiency for intertenancy and dual zero boundary wall systems for low-rise multi-residential projects,  such as townhouses, retirement villages and other similar developments.

Among those who are happy with the many benefits of the new product is Cameron Lewis, co-founder and Director of Toowoomba Building and Construction Company which he founded with Tim Grieve in 2014.

With his background and experience, Cameron is well qualified to know a good building product when he uses one. A carpenter by trade, he is also a licensed builder and both he and Tim have extensive knowledge of building products acquired from years of working in the industry.

“We’ve known each other since we were six years old,” said Cameron. “After we did our carpentry apprenticeships, we went out sub-contracting together and then decided to form the company.”

Having used Hebel for both intertenancy walls and dual zero boundary walls, they have found the Hebel systems have a number of advantages when compared with some other options such as shaftliner systems.

“Shaftliner systems have a lot of components, which creates problems,” said Cameron. “For example, you find yourself sifting through your nail bag trying to find the right screw when installing intertenancy walls, and changing bits or carrying two different drills, whereas with the Hebel system you just need one drill, one bit and so on, which makes it easier.”

Hebel is a winner in the weather

Hebel is also a winner at times when the weather threatens – and that is often the case in the regions of Queensland where Toowoomba Building and Construction Company works.

“The weather is a big factor here, with hurricanes and cyclones often affecting jobs,” said Cameron. “There’s no roof when the wall systems are being installed, and on a lot of construction sites there is no cover at all at that stage of the build, so there’s no cover for the product. As soon as the shaftliner gets wet, it is ruined and can’t be used. Even when it’s covered, at least a third of any protective cover you put on it can blow away with the strength of the winds we have here, and at least some of it is then ruined. Hebel, on the other hand, is durable enough to withstand the weather.”

As well as being speedy to install because of their uncomplicated design and minimal number of components, the Hebel systems also provide a time advantage with their fire-rating ease. When the Hebel PowerPanel50 is used, unlike other systems there is no need to install fire-rated plasterboard in the roof space or between the floor levels.

“The 50mm panel is particularly quick in this way because there is just the one panel,” said Cameron. “You don’t have the double layer, as you do with the shaftliner system.”

Already well versed in the use of Hebel, which they used recently for installing dual zero boundary walls at a 36-townhouse development by the Mosaic Property Group at Newport in the Moreton Bay region, Cameron, Tim and their team are looking forward to working with the new Hebel PowerPanel50 in the future.

As well as appreciating the benefits of Hebel for builders and installers, Toowoomba Building and Construction Company also receives positive feedback from clients about its advantages.

“They particularly appreciate the energy rating they achieve with Hebel, because it’s such a great insulator as an alternative to brick,” said Cameron.