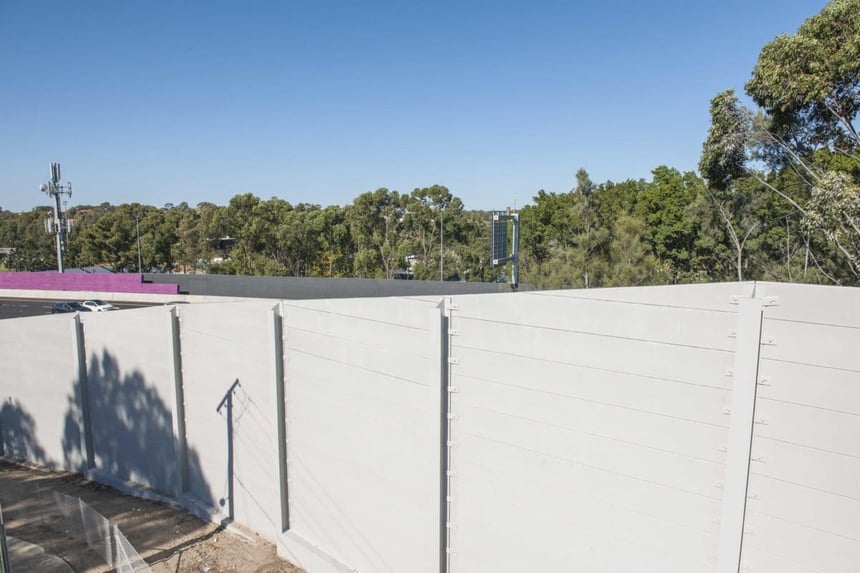 When called on to break new ground in providing noise barriers for a section of Sydney’s WestConnex motorway, Hebel rose immediately to the challenge.

The need for an innovative approach was in conjunction with work on Stage 1A of the M4 West widening project which is part of the overall WestConnex undertaking. Opened to traffic in July 2017, this stage involved widening the existing motorway to four lanes in each direction for approximately 7.5 kilometres between Church Street, Parramatta and Homebush Bay Drive, Homebush.

The “first” for Hebel related to the need to adapt its SoundBarrier system to visually follow the natural contour of the land.

“This meant Hebel was required to come up with a trapezoid panel to accommodate the requirement,” said Hebel’s National Civil Development Manager, Stewart Ross, explaining that rather than producing the usual rectangular panels, the horizontal top panels had to be shaped.

Trapezoid design was a first for Hebel

“It was the first time Hebel had done this,” said Stewart. “It was unique, and something that required early contractor engagement.  All parties had several meetings before the construction to understand and coordinate the buildability and construction of this system.”

This was the second time that Hebel has been involved in the installation of noise barriers on the M4 project, following its use in the initial construction of the motorway from Concord to Emu Plains.

“Hebel was also utilised as a high performance noise and fire wall in multiple sections along that length of corridor,” said Stewart.

On the recent M4 widening project, the advantages of Hebel once again ensured it was the preferred choice compared with other options.

“Hebel was chosen for the noise walls not only because of its high performance but also because the walls were being constructed in areas where the use of alternate heavier precast concrete would not have been possible,” said Stewart. “It could be done with Hebel due to its lightweight nature, with Hebel one quarter the weight of precast at an equivalent thickness.”

The new trapezoidal SoundBarrier system follows the contours of the landscape for greater visual appeal on both motorway and residential sides.

Lightweight and versatile Hebel made the job easier

Explaining that the noise walls were constructed on earth berms, or mounds formed from loose reclaimed fill from the site, Stewart said the lightweight and versatile nature of Hebel made it possible to use more agile, lighter-weight cranes than would have been required for other materials.

“This resulted in a reduction in set-up time for the installation crews,” he said. “It allowed them to be more agile in setting up a long, narrow corridor as an alignment and it meant, through Hebel’s more versatile nature, that any site anomalies such as misalignment of posts were easily overcome through Hebel’s ability to be designed, produced and supplied at relatively short lead times.”

As well as providing a quality product, the Hebel team was able to fine-tune its work to ensure the project was delivered on time within the overall M4 widening programme.

“We were able to adjust our production to suit the different stages of the programme,” said Stewart. “This meant that as certain areas were opened for construction, we were able to manufacture and supply panels in a very short lead time.”

A joint project of the NSW and Australian governments, the WestConnex is scheduled for completion by 2023. It will provide 33 kilometres of motorway, including 19 kilometres of tunnels, linking western and south-west Sydney to the city, airport and Port Botany precincts.