With the Hebel High Rise Façade system, the creative possibilities are endless.

Hebel was used on both the exterior and interior of the mixed-use development, which comprises 256 apartments across three buildings as well as retail, dining and convenience outlets, an IGA supermarket and child care centre.

Jewel’s waterfront location at the northern tip of the Wentworth Point peninsula demanded something special in regard to its design, a demand that Stanisic Architects answered by choosing Hebel for the façade.

“We had a very clear aesthetic for the project,” said design director Frank Stanisic. “Because this is the last building on Hill Road, right on the Sydney Olympic Park Ferry Wharf, we wanted the design to reflect the watery pattern of the harbour.”

This aim was achieved through the combination of operable, bronze-gold perforated aluminium panels that screen the buildings’ glazed areas, along with the creative finishing on the Hebel cladding that was used on all solid parts of the exterior.

While precast concrete had been the initial choice for the cladding, the architects opted for Hebel on the advice of the builder, Dasco Australia Pty Ltd.

“They recommended using Hebel because of its lightweight nature and also because it could be constructed on site, which would both improve the constructability of the project and reduce the cost,” said Frank.

“Also, although we had a cantilevered hammerhead crane on site, we were using it for other things and didn’t want to have to use it to do the cladding. Overall, we wanted a system that could be installed, routed and coated in situ, and Hebel was the obvious choice for that,” he said. 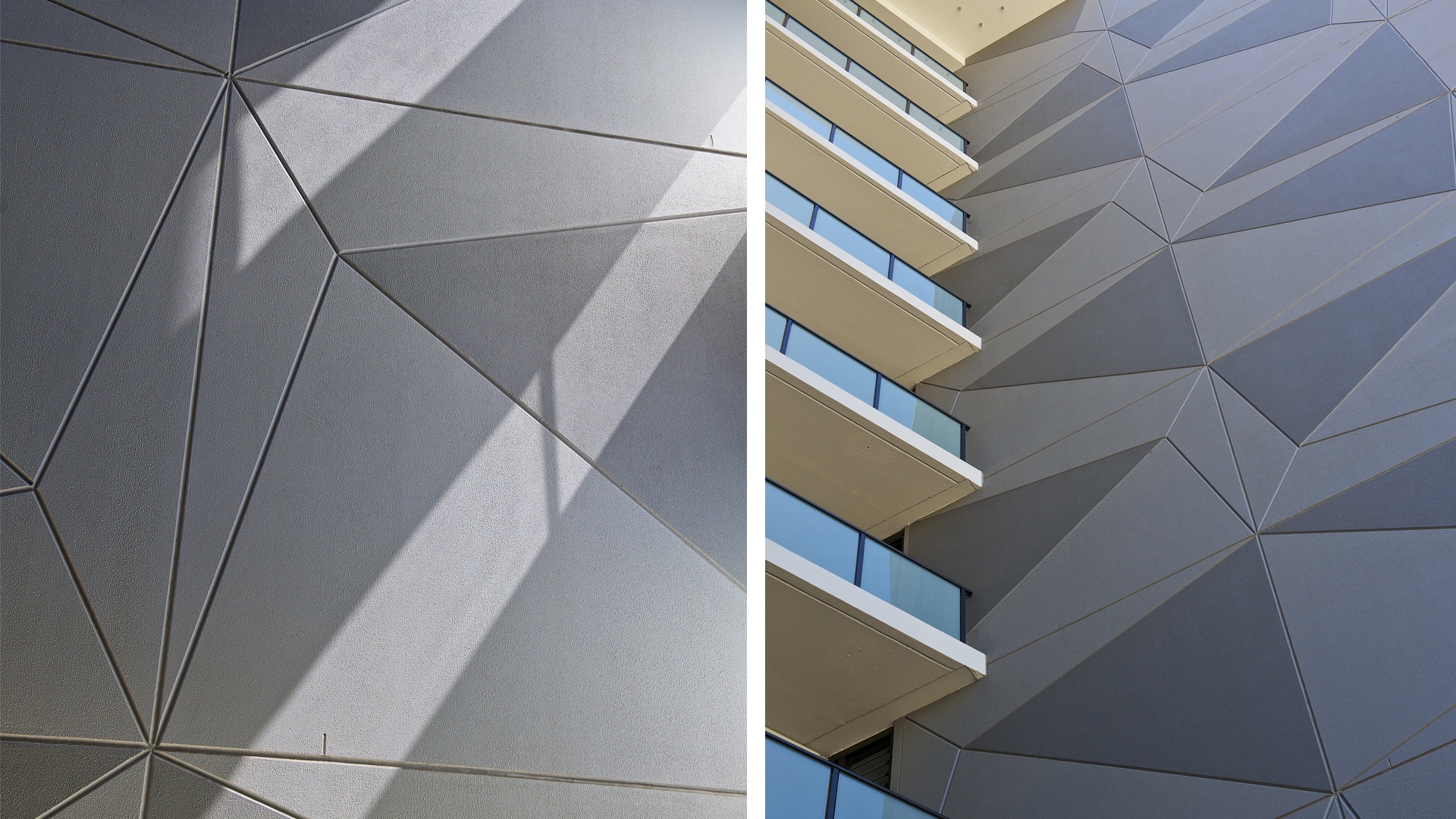 Hebel’s design versatility proved a plus

In addition to Hebel’s light weight, solidity, high fire and acoustic performance and sustainability, its versatility in regard to design was yet another reason for using it.

“While it can be used in the standard way, we wanted to do something different,” explained Frank. “We felt that the creation of a geometric pattern on the panel surface, to break up the flat areas, would combine with the effect of the perforated aluminium panels to symbolise the overall theme of the water pattern,” he said.

Creating the pattern for the panel surface was a meticulous process. Over several months, various prototypes were designed and constructed off-site before being transported to the Jewel location for consideration by the architects and construction team.

Once the design was finalised, the façade was able to go ahead as an on-site project, with the 600mm x 3m Hebel panels abutted together and fixed to the steel frames of the buildings.

The Taubmans system was then applied to the panels to provide an overall depth of about 20 millimetres.

“We wanted to build the surface out so that we could cut the grooves and joints into the surface, to develop the geometric pattern,” said Frank.

Hebel High Rise Façade systems were also used on large surfaces on the southern face of the Jewel development, with the Hebel PowerPanel system chosen for all the non-load bearing internal walls including intertenancy and corridor walls.

Apartments in Jewel, one of many residential projects undertaken on the resort peninsula by developers PAYCE and Sekisui House Australia, attracted buyers from overseas as well as within Australia. All were sold long before the project was completed and ready for occupancy in October 2017, most of the ground floor shops are now leased and operational.

While Stanisic Architects have been using Hebel externally and internally for about 10 years, this was the first time they had used it externally in a creative way.

“We’ve used it on other buildings as cladding but in a fairly standard manner,” Frank said.

“It came about because we had an aesthetic we wanted to use on the surface of the building and the builder wanted to have an in situ lightweight coating system, so we worked to resolve these things. We didn’t have any precedent so we worked it out from scratch and were extremely pleased with the outcome. It was a team effort by our very good design team, led by Associate Vince Liseo, and also by the builder’s crew, who made it possible for us to develop the use of the system and the appearance of the product.

“The way in which we used Hebel externally on this project has shown us that it is a much more versatile product than many people realise. With a little imagination, the possibilities are endless.”

Twin brothers set the standard for Dasco team’s high performance Prev Post Building your home in a bushfire zone? We ask an expert what you need to consider Next Post